It has been more than twenty-five years

since HTS owner, Don Hanson, rebuilt his first transmission at the request of a customer. At the time, the sole proprietor business was known as Don Hanson's Mobile Equipment Repair and the majority of the business was rebuilding engines and doing repairs for the local farmers and truckers in and around the Delta. The business was operated from a small shop in Walnut Grove and was literally a one man show. After the first rebuild, additional requests came in to rebuild on a per job basis for transmissions and eventually extended to requests to rebuild differentials as well. When the trips to Sacramento to buy parts exceeded three in a day, it was time to relocate and in 1991 the name changed and Hanson Truck Service (HTS) moved to its second location on Freeport Blvd. In April of 2012, HTS moved to an even larger building on Luther Drive in South Sacramento.

In the pictures below, you can see Leland O. Hanson, Don's grandfather. He was the first in the line of Hansons to work as a mechanic. 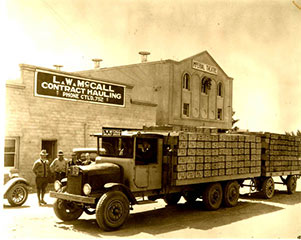 Taken in the early 1920's in Walnut Grove, CA. This truck is chain drive, with solid rubber tires on the trailer. It often made trips to San Fransisco, where at least one flat tire was always expected. It was hand-loaded with pears.

Today, the business employs four full-time builders and an outside salesman. Our accountant, Joanne Doolittle, keeps the books straight and controls inventory. Bob Malsack has over thirty years in the industry. As shop manager, he oversees build quality, responds to customer inquiries, does case work and builds transmissions. The build crew also includes Gary Bates; specializing in differentials, Gary has been with the company for over seventeen years. (The only one with more years is Don himself!) Jorge Aleman has over thirty years of heavy duty truck experience, and is one of our full-time mechanics. Bryce Campbell is another one of our full-time mechanics. A recent graduate of UTI, Bryce has been with the company since 2010. Ed Bolla handles all front counter calls and walk-ins for sales of parts and units. He also has more than 30 years in the industry. Ed will most likely be the one you speak to when you call us. Jonny Baro is our inventory control specialist. Put the entire team together and HTS represents over 100 years of local transmission and differential experience - it's easy to see how we can stand behind our work!

From a growth perspective, the business has grown from building one transmission at a time to stocking every major transmission brand (Fuller, Spicer, Eaton and Meritor) and practically every model. Differentials in stock cover almost every conceivable range and ratio. We are known for our ability to rebuild your unit, sometimes for less than buying exchange. On a typical day, we have more than 200 transmissions and differentials in stock ready to ship.

HTS is a local company, with knowledgeable and experienced staff. We stand behind our work offering a full year warranty for the products we build. Call us and we will happily provide quotes for in stock inventory, and for custom rebuilds we will provide free estimates upon inspection. 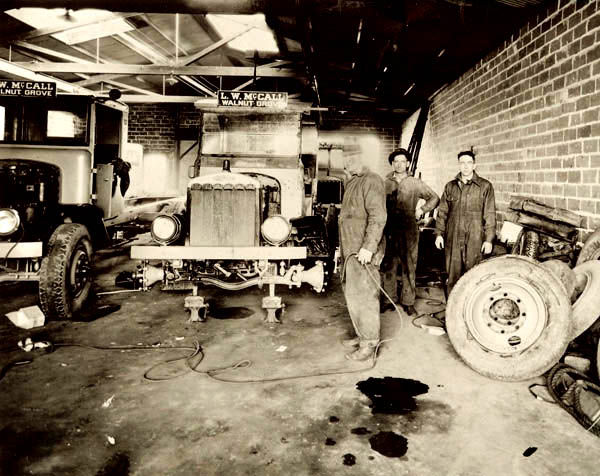 Taken in the early 1920's in Walnut Grove, CA. The truck on the left is a Fageol being built as a kit. The truck on the right is a Moreland. Don's grandfather, Leland O. Hanson is on the far right.
All text and images © HTS 2022.